IT GOT A LITTLE DUSTY IN THE STUDENT SECTION SATURDAY NIGHT. 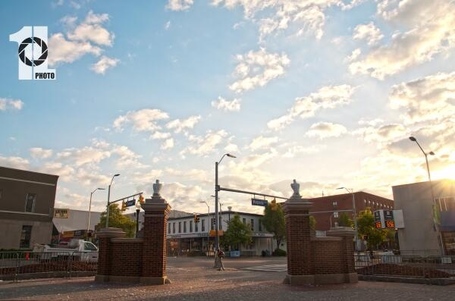 Since the day the oaks were removed at Toomer's Corner, I've kept this photo by our friend Phil Smith as the wallpaper on my iPhone. He's an amazing photographer, You should pay him money to capture moments in your lives. And he loves Auburn. And bow ties.

Phil captured this photo the morning after the oaks were taken down. I believe it was a Wednesday. And I knew that I wanted to save it. I wanted to look at it every day and be reminded of what I would need to expect the day I returned to Auburn for the first time this season. I wanted to prepare myself.

If you follow me on Twitter or you read my TAKES when that occurred, you'll recall that it wasn't a pleasant experience for me. A lot of violent, hateful emotion came out of me that day. It was an exorcism. And since, I have seen this picture every time that I look at my phone (which is a lot; thanks, ladies who put up with me). It's a photo that captured the end of a period in my life when I was angry about a lot of things that weren't going to be changed, regardless of how loudly I shouted. And at this precise moment that Phil captured, the sun rose again.

I'm not really one to be moved by art. I'm not going to wax intellectual about a unique creation or an image that moves me very often, But this one has. For a long time. It's helped me realize that after the darkest day, the sun will rise again.

So this past weekend, I visited Auburn for the first time since. In that time, much has changed in my life. But to save you a snoozefest, it's all been really great. And I believe that this image, this moment in time, captured something more than a scene. It captured a moment in my life. And each morning that I hit my own snooze button on my iPhone, I see it. And I am reminded of how far I have come and how far Auburn has come. It seems dramatic, but here we are.

Nick Marshall: The pass to himself. The touchdown to Quan Bray. The drive. Each week, I've been breaking down which comparisons best fit Nick Marshall, in light of the demands that he must be Cam Newton. I think I finally have something for which I'll allow a Cam Newton comparison: his confidence. Playing his first game at quarterback in the toughest conference in the land, Nick Marshall executed a spectacular two-minute, 88-yard drive for the winning touchdown. He had that one really gross overthrow late, but he also had some receivers that simply weren't catching balls.

I think Marshall's play is sort of reflective of what this season is so far: It isn't perfect, but it gets the job done. So, 339 yards passing with two touchdowns and two interceptions, one being the failed Hail Mary at the end of the half? I'll take it.

Visiting Backup Quarterbacks: Are you a second string quarterback? Would you like fans to question why you are not starting? Do you like lemonade?

Welcome to Auburn, Dak Prescott! You're among an elite group of men who just needed to surprise the Plains with your prowess. Fans knew you'd be good. They probably chatted you up on message boards. But now that you have played in the loveliest village, the world can hear your cry!

Maybe it's Frost? Look, sometimes you enter a kitchen and you're asked to make a delicious meal with current ingredients. And sometimes, you only have Miracle Whip and not real mayo. The finest chef can only do so much. But the finest chef will figure it out. There are going to be days this season when Auburn's chef walks into the kitchen against a competitor whose kitchen is stocked with fine, fancy mayos and he simply can't cut it. But for the third time this season, Auburn's chef made Miracle Whip taste just FINE.

The student section: So, I got into the student section? That was neat. Momma Goldberg's is in the stadium now, but they don't take Visa. The girls are still pretty. KIds still sneak in booze.

But I'm proud of y'all. Several student section things, and otherwise, happened while I was in school: The eagle's first flight was against Wyoming on that Thursday opener in 2000, my first game as a student. The first time I remember "Crazy Train" being played, I was a freshman, and I added the "AY AY AY." I don't want to brag, but that was my thing. Some other goob added the "WOOP WOOP WOOP," and I don't claim that. "Livin' on a Prayer" is still a thing.

But here's why I'm proud of y'all: Y'all stand on that bleacher in front of you for 60 minutes. You yell, loudly. You never sit down. You follow mic man's cheers. You follow the band's lead on songs with cheers in them. And even when the ball in play means you are supposed to shut up, you keep going. And this football team knows it. When they finished at midfield on Saturday, they sprinted to the student section to join in the celebration of a huge win for Auburn. My heart swelled three sizes larger like the Grinch's, and I'd be lying if I said it didn't get a little dusty.

There are other schools that have student sections that don't appreciate it. Auburn does.

Temporary Wire Rolling Structure: I can make fun of this thing all day, and have, but aside from how stupid it sounds, it's not practical.

The toilet paper only catches if you throw it over the giant AU logos. It won't catch on the wires. So why? People are just rolling everything else surrounding it. At this point, the overhanging polls in the intersection are the things most getting rolled.

It was a cool sight, though. Mississippi State fans having their pictures taken in all of it. Overhearing them saying, "I really want to be mad about this, but everyone has been so nice."

I just kind of sat back an observed. From the same spot I watched the final rolling in April. It was a little surreal, but I was proud that the tradition lived on, perhaps with renewed life as people willed its survival.

Personal aside: A lot of folks, some of my best and dearest friends and some new friends with whom I hope to maintain long, healthy relationships, showed a lot of fine hospitality this weekend. I love each of y'all the exact amount our relationships call for, and in some cases, more. Thank you, from the depths of my heart. War Damn Eagle.