Share All sharing options for: Wednesdays with (Oscar) Whiskey

Hey-oh, Auburn fans. You guessed it, it's another Wednesday with me, Oscar Whiskey! Three weeks into this 2013 season, and our Tigers have chalked up three wins, including a much-needed conference victory over Mississippi State. As with the beginning of every football season, there have been some good things, some bad things, some "THAT! DO MORE OF THAT!" things and some "THAT! STOP DOING THAT!" things. At this point in the season, every game played has all the markings of positive steps forward. Now, sure, they're not the leaps and bounds forward as we'd like them to be, but hey, it wasn't like the Tigers were going to go from "Oh sure, go ahead and have all the third down conversions you want" to a stifling, suffocating defense. It takes time, practice, game experience and players who know what the hell they're doing. Those are all important factors -- especially that last part. Anyway, let's get going shall we?

Has anyone else noticed who Auburn's first four opponents of the season all have the word "State" in their school name? Washington State. Arkansas State. Mississippi State. Louisiana State. I don't know why, but I kind of find that to be a humorous coincidence. Has this happened before and I just didn't realize it -- or care to realize it? Is this all a coincidence, or was it planned by the athletic department, or am I just wasting everyone's time pointing out some irrelevant, innocuous "fact." #WarEagluminati

I'm sure a good number of you have read yet another one of Poseur's, of And the Valley Shook, hate articles. I have been reading his articles over the past few years, so I have grown callous to his inflammatory sensibilities. But every now and then, something he writes makes me do a double take, narrow my eyes and say to myself, "Oh is that so?"

"Mascot? Come on, there are now three Tigers in the SEC. Can y'all stop ripping us off? Any of the rest of y'all making a tribute to soldiers in the Civil War? Nope."

No, you're right, Auburn didn't name its Tigers as a tribute to those who fought in the Civil War, but the Auburn Tigers took the field before the LSU Tigers did. In fact, Auburn's first season was played in 1892 and the Tigers played four games, finishing with a 2-2 record. LSU's first season? 1893, when it played one game, which was a loss. At least the Auburn Tigers won their first game ever played, which was against Georgia and on the road. Curse you, facts, yet again!

"What's Auburn's tradition? I mean, other than going on NCAA probation." 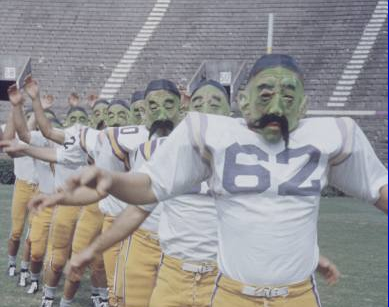 But tradition nonetheless, and good call on keeping this one alive.

The Lights that Stop Me

I have had the good fortune in life to do a good bit of traveling. I have seen the natural majesty this country has to offer. I have witnessed an Iftar sunset in the Iraqi desert. I have seen one of the world's tallest structures and thought, "There's no way that is real." I have sat in the Bierzelt at Oktoberfest and watched 5,000 men and women sing "Country Roads." I could go on and on, and I know that over time a lot of these magnificent places will slowly slip and fade from my memory. But there is one place that I know will be permanently etched into my memory, and that place is Tiger Stadium.

Aptly named "Death Valley," Tiger Stadium is easily one of the most harrowing college football experiences I have ever had. The sights and most importantly, the sound, of Tiger Stadium is a cacophony of teeth-rattling, ear cavity-devastating auditory explosives. You walk out of their almost certain you've done permanent damage to your eardrums, not to mention your dizziness caused by the clouds of bourbon that swirl around the stadium. I had the (dis)pleasure of attending the 2005 game between Auburn and LSU, and I can say without hyperbole, I am lucky to be alive. However, I do not regret for one moment in being in attendance for that game. I might not have been to every place this world has to offer, but I can say that I have been to Tiger Stadium.

First off, let me begin that I am in no way stating that football is like war or that war is like football. It's not. They're nowhere close in similarity. Now, the use of the quote above I found to be apropos to the essence of Gus Malzahn's offense: tempo. This offense succeeds or it fails on whether or not based on how fast it can move the ball.

We have only seen a few times Auburn's current incarnation move like the head coach wants, but in none of those circumstances has the team faced a defense like LSU's. For Auburn to find success, the tempo needs to increase at a level that doesn't allow LSU a moment of respite or reform.

I have never been one to believe that increasing your speed into a brick wall will cause less damage to you. In my mind, the faster you go, the more damage you'll cause to everything around you -- and that's exactly what I want Auburn to do on Saturday. I want Auburn to move so fast and with such ferocity they cause a venerable nuclear explosion in Death Valley and take all of Baton Rouge with it. Sure there will be casualties and Auburn might come out weaker for it, but at least LSU will be dead and the sacrifice will be honored and remembered for ages to come.

Well, that's it from me for this Wednesday. Enjoy the rest of your week, and War Eagle!