Auburn vs. LSU: Breaking down the X's and O's

Cam Cameron is the new offensive coordinator in Baton Rouge, but expect the same pounding runs and play-action passes that LSU usually likes to deploy.

Share All sharing options for: Auburn vs. LSU: Breaking down the X's and O's

In the offseason, LSU head coach Les Miles hired Cam Cameron as the team's new offensive coordinator, replacing Greg Studrawa. Though he has experience in college football (most recently as the head coach of the Indiana Hoosiers), he is perhaps best known for his work in the NFL as the offensive coordinator for the San Diego Chargers from 2002-06. After serving as head coach of the Miami Dolphins in 2007, he was back to running offenses after just one year. He led the Baltimore Ravens' offense from 2008 through most of 2012, but he was fired after week 14 of the last season while the Ravens went on to win the Super Bowl.

While working for the Chargers, Cameron was grafted into the Don Coryell coaching tree through Norv Turner. Coryell's offense, now known as Air Coryell, can be described as a deep passing game supplemented with power runs into the middle of a defense. It relies on the passing game like the famous West Coast offense, but prefers to stretch a defense vertically rather than horizontally.

Don Coryell not only designed sound concepts for deep passes, but he also constructed an efficient way of communicating them. This system is known as a route tree. 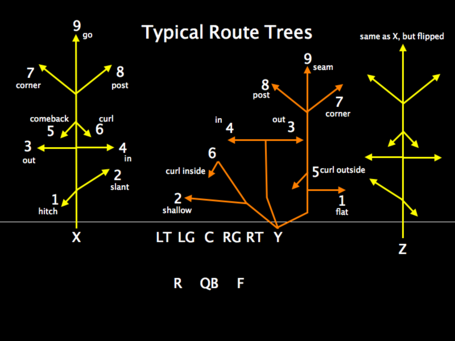 Every team can customize the tree as seen fit, but the image above is a typical example. Generally, the further down field the pass is, the higher the number. Also, routes that turn inward are odd numbers, while routes that turn out are even numbers.

LSU has long been known for its bruising running game, and rightfully so. It seems the Tigers always have huge offensive linemen and a deep stable of running backs. They also have tended to use "pro-style" formations with a "pro-style" passing game. With the addition of Cameron to the staff, only the communication methods have changed. This offense will look much the same.

LSU and TCU played in one of several new kickoff games this season. LSU won, 37-27, but TCU hung in there for all 60 minutes, never behind by more than 13 points. In fact, if the Horned Frogs had not punted while down 10 with 5 minutes to play, they may have given the Tigers more of a scare. After the punt, they never touched the ball again. Regardless, I noticed a few things about this year's LSU team.

First, the running game seemed good, but not great. Terrance McGee and Alfred Blue combined for 32 carries and 184 yards, so they got good numbers. It just didn't look like the offensive line was getting much push, and the backs would either get a lot or yards or nothing. However, I understand that Jeremy Hill has had great success since returning from suspension. I just don't know how much of that is a function of the competition (UAB and Kent State). Auburn has to cover those A gaps from the beginning, something our Tigers haven't done to start any game so far. If LSU gets the running game going, it will be tough to stop the next group of players.

Quarterback Zach Mettenberger showed significant improvement over his 2012 self. Plus, receivers Odell Beckham and Jarvis Landry displayed great ball skills, catching deep passes despite tight coverage. LSU used play action a lot (many times on first down), and it proved quite effective by preventing linebackers from helping in pass coverage. By running so much early, with or without success, the passing game became very effective.

This may be my fault, but I haven't noticed Auburn's safeties much this year. Runs have been stopped by the defensive line and linebackers, and passes have been stopped by the corners. Other than safety/linebacker hybrid Robenson Therezie, the safeties haven't been needed. Yes, Washington State threw the ball a ton, but the passes mostly short and quick. Expect LSU to test the safeties with deep throws.

On defense, the Bayou Bengals have a great defensive line, a good secondary and a linebacker corps that is still trying to find chemistry. TCU used more four- and five-receiver sets than I was expecting, and it proved quite effective. Quickly getting the ball our of the quarterback's hands negated any pass rush. The linebackers and defensive backs played well, but it is hard to tell how they will do against a spread-to-run offense like Auburn's.

Before this season began, And the Valley Shook broke down some basic Air Coryell and how it could apply to their Tigers. For more information, see Part 1 and Part 2.

In Air Coryell play calling, the play name contains three numbers and at least one add-on. The three numbers refer to the X-, Y-, and Z-receivers' routes based on the team's route tree. The add-on usually refers to a fourth receiver's route. While Washington State's passing game is designed to stretch a defense horizontally and stress the linebackers, this offense will stretch the defense vertically and stress the safeties, particularly the communication between the safeties and the cornerbacks.

As I said earlier, LSU threw the ball quite well in this game, so I found three plays that specifically show how the safeties are attacked in this offense. 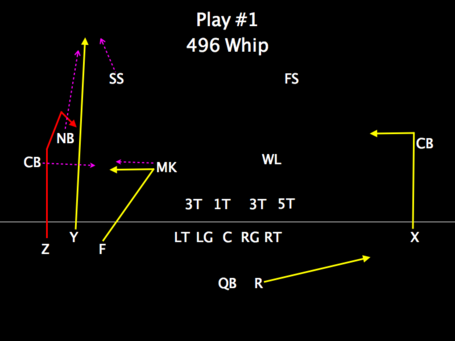 LSU comes out in Trips, showing three receivers to the left. TCU has three DBs to defend them, four if you count the linebacker, but their coverage responsibilities break down when the receivers stretch the defense vertically.

The Y streaks down field, attacking the deep zone and taking two defenders with him. The F runs a whip route and stays in the short zone. By running right at the linebacker and then whipping back toward the corner, he also attracts two defenders. That leaves no one left to defend the Z running into the intermediate zone on a curl route. The poor angle by the back side safety makes this play even more devastating.

The very next play is a perfect example of how play action can open up the passing game, even if only two receivers run routes. 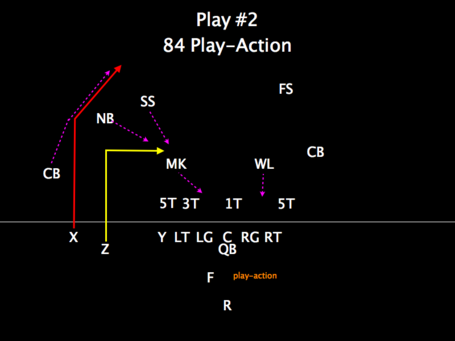 LSU shows a Strong I formation with a covered tight end. With only the X and Z posing immediate down field threats, this formation is screaming run. Instead, the Tigers fake the run, pass protect with eight players, and pass the ball deep. There are three defenders available to cover the two down field threats, but lack of communication throughout the defense allowed the completion.

The Z runs an in-route and runs between the safeties and the linebackers. The linebackers don't cover this route because of the run threat, so a safety has to come down to cover it. Unfortunately for TCU, both the safety and the nickel back run with the Z. This leaves the X one on one with his defender. The corner is giving the X inside position because he expects safety help from that side, but when there is no safety help, the post route gets the receiver open. Three plays later, LSU would score its first touchdown of the night thanks to these two plays that gained a total of 70 yards.

With three minutes left in the second quarter, LSU was driving down the field, hoping to extend its lead before halftime. The Tigers would kick a field goal as the half expired to go up 16-10, but they had to convert two 3rd downs to get that opportunity. One of those 3rd-down conversions shows how the running backs can affect the passing game without play action. 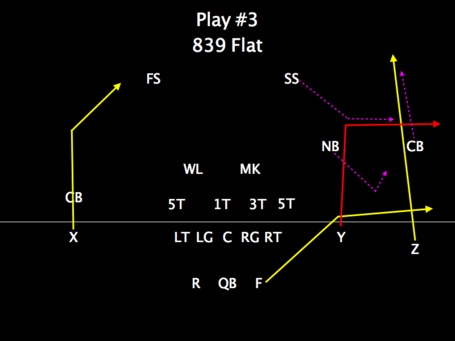 LSU lines up in the Twins formation and runs 839 Flat. The Z runs a go-route and his corner follows him. The Y runs an out-route, turning just after passing the nickel back lined up over him. Meanwhile, the F runs out to the flat and this puts the nickelback in a bind. It looks like he assumes the safety will pick up the Y, so he runs toward the flat. But the safety isn't able to get to the Y before the pass is complete for a 15-yard gain and a first down.

In each of those plays. it looks like a communication breakdown allowed the big play, specifically communication between the safeties and corners. Hopefully, Auburn's defensive backs can maintain their responsibilities, trust their teammate to do their jobs and keep the passes in front of them rather than watching them fly over top to open receivers.