Auburn and Washington State played a tight game Saturday, with neither team ever leading by more than seven points. Two drives in the fourth quarter may have made the difference.

Share All sharing options for: Auburn 31, Washington State 24: Breaking down the key drives

(This post was inspired by and heavily influenced by The Key Drive posts by millsGT49. See this for the origin/development/magic behind the equivalent points.)

Despite the "fireworks" predictions, Auburn and Washington State had trouble sustaining long drives, instead scoring on big plays, short fields and special teams. Between them, there were only three drives of eight plays or more in the first half. Starting in the middle of the third quarter, the Tigers and Cougars first traded field goals, and then traded punts. When Auburn started its first possession of the fourth quarter, the Tigers were leading 28-24 and looking to increase the advantage to at least seven. The next two drives were the last sustained drives by either team, and they basically decided the game.

Out of the Wildcat formation, CAP makes something out of nothing by dodging a defender in the backfield and cutting back for three yards.

This play is meant to look like a sweep play to the left. Both guards (Alex Kozan and Chad Slade) pull, and Tre Mason runs behind them. This motion sucks in one linebacker, but it also allows a free rusher through the line, Ioane Guata. Fortunately, Nick Marshall's speed wins over Guata's size. He is able to avoid the sack and then hits Sammie Coates on a crossing route that started on the other side of the field. 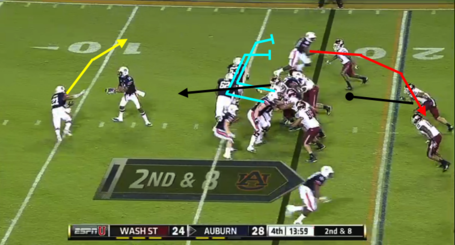 A well planned cornerback blitz almost stops this run before it gets started. Daquawn Brown sprints toward the backfield as soon as the ball is snapped but Mason is able to avoid him. Right tackle Patrick Miller does a nice job of holding his block on Destiny Vaeao just long enough for Mason to get around him after the delay in the backfield. 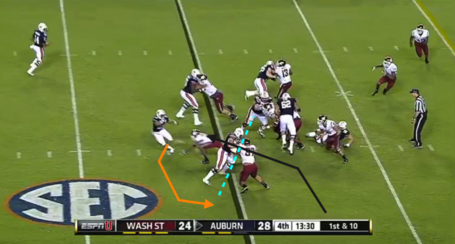 Washington State only rushes three defenders on this play? With eight players in pass coverage, that's what you do when you dare a team to run. Auburn will run the ball whether you dare it or not. Granted, the Cougars guess right because a pass play was called, but Marshall reminds them that Auburn had been running pretty well all game.

This formation has the tight end covered by the 9, so he is not an eligible receiver. Instead, the left tackle is! Not that it matters, because this was a run the whole way. Kozan pulls around to the right and finds Justin Sagote, the first linebacker coming in to stop the run. CAP is able to run just behind this block for the first down.

I'm not sure, but this looks like a read option play to me. Marshall has his eye on somebody while he hands the ball to Corey Grant. He should be looking at the nearest unblocked defender, which is the middle linebacker, Darryl Monroe. When he stays in the box, Marshall decides that the run should go outside. Travon Reed gets enough of a block to prevent a tackle for loss, and Jaylon Denson does a great job preventing his man from making a play. Slade pulls around to help out by blocking the weak side linebacker. This block is more important when Marshall keeps the ball. 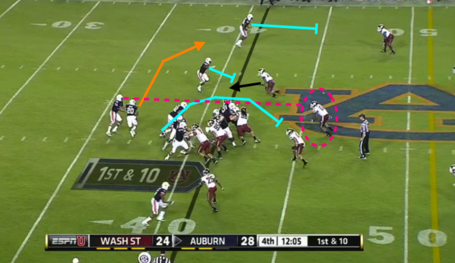 Mason is able to move in the backfield so well that he is able to get two yards despite having to dodge tackles three yards behind the line of scrimmage. It looks like Reese Dismukes just left his first block too early, looking to get to the second level.

Here's the Wildcat again! In the past few years, Auburn's Wildcat formation has been nearly useless because of the indecisiveness of the wildcat quarterback. Cameron Artis-Payne knows how to make decisions. Even though the entire play is designed to be run up the middle and just to the right, CAP sees a few things. First, the right side of the line is completely clogged with defenders, despite the presence of Miller, Kozan, Jay Prosch and Greg Robinson. Second, Damante Horton chases Corey Grant across the formation, so there are few defenders to the left. Third, Brandon Fulse is on the left side of the line, so he can slow down at least one defender to that side. CAP makes the decision to run left, away from everyone else, and gains 19 yards on third down. 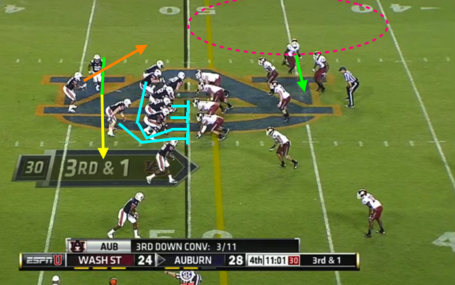 Blitzing corners is a great way to screw up these outside runs. Daquawn Brown blitzes again, and Prosch can't prevent him from strongly affecting Ricardo Louis's path. Just when he was about to cut up the field, he is forced to continue running east-west and is brought down for a five yard loss. These negative plays are the sort of thing that kill long drives.

Marshall is able to get decent yardage out another scramble. This time, Washington State brought five pass rushers, only dropping six defenders into coverage. But Auburn kept seven back to block and it looks like only three receivers actually ran routes. Plus, the bootleg motion means that the pass protectors did not hold their blocks forever. They aren't trying to create a safe pocket. They are just trying to delay the rush enough for Marshall to get going.

The offensive line provides a pretty pocket this time. Marshall delivers a well-thrown ball, and Louis makes a routine catch. But Darryl Monroe makes a shoestring tackle and the drive is over. Cody Parkey makes a 42 yard field goal, his third of the night.

A team starting on their 15 and reaching the opponent's 24 scores an average of 3.078 points, so Auburn got the points their offense deserved. Though most of the plays were on the ground, two plays were called passes that Marshall turned into runs. Overall, this drive showed that Auburn is capable of moving the ball down the field in mostly small chunks, at least long enough to get into scoring position before making a significant mistake.

Teondray Caldwell rushes up the middle for 3 yards (0.104 equivalent points)

Leach's offensive lines have really wide splits, meaning each player is much farther apart than what you typically see. In this play, Auburn's defensive line has two 5-techs and two 3-techs, so the center, Elliot Bosch, is free to immediately block the middle linebacker, Jake Holland. A simple run up the middle gains three easy yards.

Auburn's defensive line gets plenty of push on this play, but Connor Halliday has enough awareness to avoid the pressure, particularly the rush from LaDarius Owens. Halliday finds Gabe Marks running a dig (or deep in) route to the right. 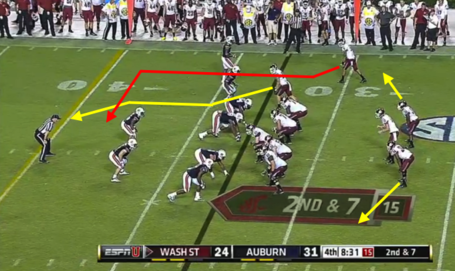 WSU sends its running backs out either side of the backfield as outlet receivers. Caldwell makes a nice one-handed catch after Owens forces Halliday to get rid of the ball.

Double slants to the right and a broken Ryan White tackle equals a 12 yard gain for WIlliams.

Nearly the same play, but completely different results. Montravius Adams (Mon Mon) immediately beats Bosch and is able to tackle Laufasa for only a one-yard gain.

WSU did not throw deep often, and maybe it had something to do with Auburn playing its safeties so deep. This pass traveled about 10 yards past the line of scrimmage in the air, and that was about as deep as WSU ever went. Adams was closing in, so Halliday probably didn't get off the throw he wanted, but the pass was nearly good for a first down. Instead, Williams was out of bounds and dropped it.

Connor Halliday passes up the middle to Gabe Marks for 7 yards (0.480 equivalent points)

On fourth down, WSU turned to a modified form of the Mesh concept. The wide receiver on the right and the slot receiver on the left ran through the box, forcing the linebackers to cover through traffic. 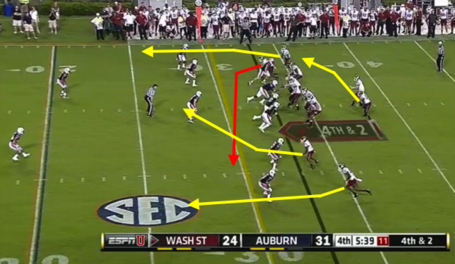 A running back even came out into the flat, which caught Holland's eye. Because Holsey had to run around Holland, he was not able to keep up with Marks across the formation and had to make a desperate dive for the tackle, well after the two yards WSU needed. 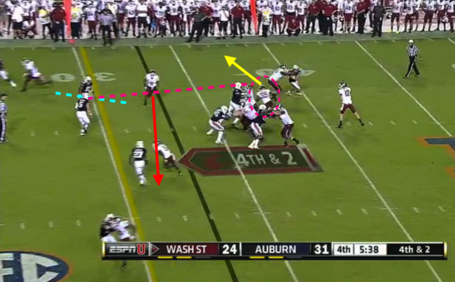 I think WSU was going to take a shot at the end zone here, but Adams made his presence known. Holsey and Therezie were both covering the safety-valve running back, so someone was open, but Halliday didn't have time for find him. He wisely threw the ball out of bounds.

I certainly don't know the intimate details of Auburn's defense, but I noticed something on this play that I thought was odd. WSU running back Marcus Mason begins the play on the left of Halliday. Chris Davis seems to yell something to Holland and the defensive linemen. 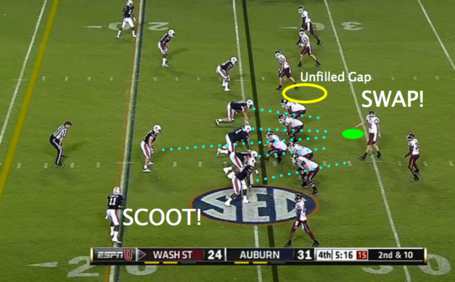 They respond by shifting to the offense's right, the side Mason would likely carry the ball. But at the same time, Halliday tells Mason to swap sides, as if he was lined up incorrectly to begin with. 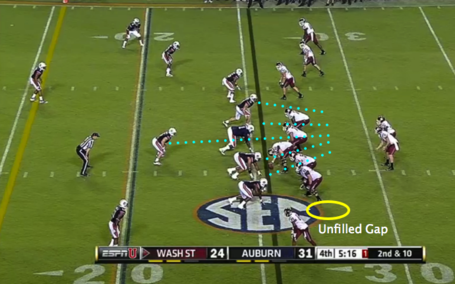 Anyway, when Mason ran to his left, the offensive linemen were able to easily seal off the edge because of Auburn's shift. Safety Ryan Smith had to push him out of bounds to prevent the touchdown. 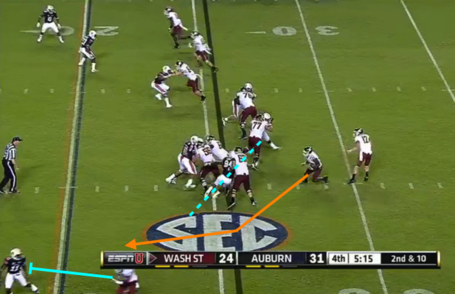 The play that (should have) sealed the win. Halliday reads the coverage and throws to Rickey Galvin running an out-and-up route. Therezie never bit on the out portion of that route and was perfectly positioned for the interception. After the game, Halliday said he read Cover 2 and knew there was a hole he could have hit if he had not underthrown the ball. I think that his read was part of the problem. He's right that if it was Cover 2, the post route would have pulled Jonathon Mincy over to the middle of the field and the out-and-up route would have been wide open behind him. But there were at least three deep defenders, two on that side of the field alone (Jermaine Whitehead with Mincy). 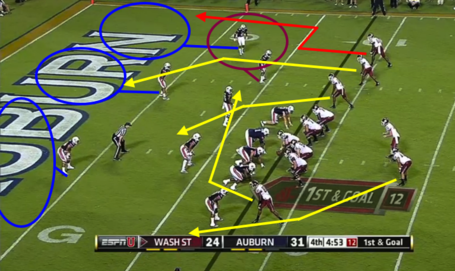 Mincy ignored the post because Whitehead was defending it. This allowed Therezie to play in front of Galvin, knowing he had help over top. Let's just be glad Halliday didn't notice that he had two open receivers in the middle of the field (mesh again). 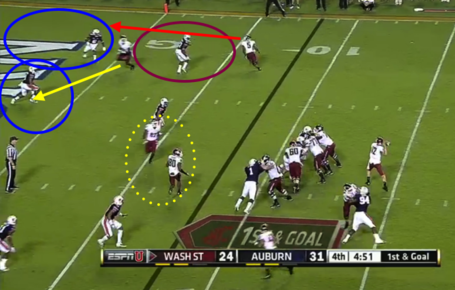 A team starting on its 30 and reaching their opponent's 8 scores an average of 3.1 points. Washington State did not score any points and actually made it more likely Auburn would score next by turning it over. That's why the interception affects the equivalent points so negatively.

I was surprised to see the balance in the rushing and passing yardage, but half of those rushing yards came in one play. Overall, Washington State had their offense clicking, but one great play by Auburn's defense unraveled the whole thing.