A series of random thoughts and nonsense from everyone's favorite Dean of Exploding Dog Studies.

Share All sharing options for: Wednesdays with (Oscar) Whiskey

Hello, everyone, Oscar Whiskey here, and what a fun opening weekend of college football! Well, unless you were one of the eight FBS teams that lost to an FCS team or this Georgia fan, it was pretty fun. Of course, capping off all that fun was watching our Tigers start the season with a win against the Washington State Cougars. While it wasn't the same outcome as the last tilt between the two teams (which I would have much rather preferred) it was still a quality matchup. As mentioned by almost everyone already, Auburn certainly looks better than it did last year but still have plenty of work to do.

So, what's the point of this post? Well, I'm not 100 percent certain other than I don't plan on making the same old game day review, especially four days after the fact and everyone has had their say. Trying to write up a preview of an upcoming opponent is also something I want to avoid because A) sifting through piles of coachspeak is no fun, B) postulating preview off of said coachspeak and from analysis of team's previous performance is exhausting and C) the potential of being horribly wrong in a preview is terrifying. ( D) I'm also very lazy.)

Well, then what's the point of this post? Simply, to have some fun! It's Wednesday, the week is almost over and look there's more college football on the horizon! Huzzahs and War Eagle in the highest! Let's get started!

If you didn't already know this, I guess I should start off by mentioning that I am not from Alabama. Nope, I'm from Texas, a northeast suburb of Houston to be exact. So it goes without saying that if I want to see an Auburn football game in person then I have quite a drive ahead of me. I've made the drive coming close to 50 times since my freshman year at Auburn, and the trip hasn't gotten any shorter. Finding a way to pass the time is essential but you don't want this to be too distracting or you might be the cause of some horrific accident.

In my youth, I would jump on the interstate, crank up my car stereo to 11, accelerate to 85 mph and let my six-disc changer do the rest of the work. Now that I'm older, have hearing difficulty, dislike the music I listened to back then, find going over 70 mph to be ludicrous and have a busted CD player, I have had to find a new way to entertain myself through the long stretches of the Southeastern Gulf Coastal Plains.

In a world oversaturated with readily accessible mass media, you can find a podcast covering just about anything. A majority have run times over an hour and a half, and after listening to a few back to back, you've killed a good part of your trip. Whether you download them ahead of time or have a great data plan and a way to pipe them through your car stereo,  you're good to go. Here are a few suggestions/favorites:

The College and Mag Show with Chris and Aubielicious. OK, this is really a shameless plug for our editor, but I thoroughly enjoyed the guys' first go at postgame coverage.

The Shutdown Podcast. Staying with college football-related auditory shows there is nothing better, funnier and more absurd than listening Spencer Hall and Jason Kirk.

How Did This Get Made? Do you love-hate/hate-love bad movies? Then this is the show for you. Every other week, Paul Scheer (The League, NTSF:SD:SUV), June Diane-Raphael (NTSF:SD:SUV, Burning Love), Jason Mantzoukas (The League, The Dictator) and a special guest come together to discuss/rip on particularly bad movies. If you've never listened to the show, I suggest starting off with episodes covering From Justin to Kelly, Jingle All the Way, 88 Minutes and Anaconda.

Fat Man on Batman. Do you love Batman? Do you enjoy the works of Kevin Smith aka Silent Bob? Then definitely have a listen as Smith gushes all over the Dark Knight with special guests like Mark Hamil, Paul Dini, Adam West and many of the creators of this legendary DC series.

The Nerdist Podcast.  Comedians Chris Hardwick, Jonah Ray and Matt Mira get together and chat with various celebs, comedians, Internet personalities and all sorts from the world of nerd pop culture.

Rooster Teeth Podcast. The creators of Red vs. Blue, the Internet's longest running web series, and machinima aficionados get together once a week to discuss just about anything. They also have a purely gaming podcast called The Patch.

Note: Almost all of these are NSFW, so if you do decide to give a listen on the job, make sure you do so with headphones. 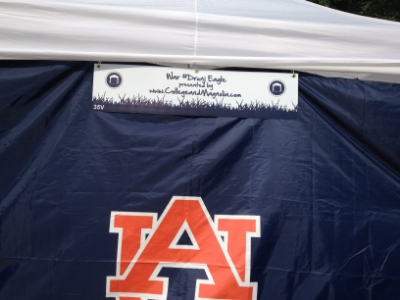 It's been a good long while since I've been to a tailgate. In fact, during my whole time at Auburn, I only went to one such event, which was before the 2003 Iron Bowl. As a student, I was much more concerned with getting the best seat possible in the student section than watching someone potentially set themselves on fire over a charcoal grill.

With that said, stopping by the War #Drunj Eagle tailgate was certainly one of the highlights of my weekend. Meeting up with the other folks involved with College and Magnolia was a great deal of fun and runyogasurf puts on one hell of a party. If you'll be at any of the home games this season, I highly recommend stopping by and hanging out with these guys and gals. I don't know when I'll next be on the Plains, but when I am, I will definitely bring some local Houston brewed beers for y'all to try!

Things I said during the game I have no intention of taking back.

(after drag route over the middle allowing Wazzu to convert 3rd down) "JAKE! THAT'S YOUR ZONE! HOW DO YOU MISS THAT?!" (Holland pulled from the game) "THAT'S RIGHT GET OFF THE FIELD!"

"MINCY! MINCY! MIINNNNCCCCEEEEEE! HE'S GOING TO THROW IT RIGHT AT YOU GGGAAAAAHHHHH! SUM'BITCH! I TOLD YOU!"

"SNAP IT! SNAP IT! GET AWAY FROM HIM REF! SNAP IT NAAAAOOOOWWW! SNAP IT!" (the play clock reads 24 seconds)

"Oh we're going for two? Oh man. Go go go gogogoGOGOGOGO AHHH DAMN IT! He's down. Yeah he was down. Oh wow, they're giving it to us. Stupid refs."

"JAKE! QUIT TRYIN TO INTIMIDATE THE LINE! AIN'T NO ONE SCARED OF YOU!"

(after failed back to back trick plays) "LOOK AT 'EM TRYIN TO RUN THAT GIMMICKY HIGH SCHOOL OFFENSE PAAAWWWLLL! THAT WON'T WORK AG'INST THE TIDE WOO!"

"RICARDO! WHAT THE HELL ARE YOU DOING?! YOU EITHER RUN A FLAG OR A POST! YOU CAN'T DO BOTH ... OR EITHER FOR THAT MATTER!"

Most overheard statement from Wazzu fans

Every time I heard this I couldn't help but chuckle or snicker to myself. It was quite a warm weekend, but as someone who spent eight months in the Iraqi desert, I will never complain about heat ever again. Whenever folks from outside the southern region of the United States head down our way, I have no idea what they're expecting, and at the same time have no intention of warning them.

The following is a transcript of a conversation after the game between myself, a Wazzu fan and my sister who we'll refer to as Sierra.

Wazzu fan: Does it ever get cold here?

Me: Meh, not till late November to January, but the temperature does drop.

Wazzu fan: Does it snow here?

Sierra: Yeah, it snowed every year I went to school here.

Sierra: Yeah, it's not a lot but it has snowed.

Wazzu fan: Does it stick or immediately melt?

Sierra: It'll last about a day or so.

Me: It gets cold enough but nothing like where you're from.

Well, there you have it. Just a little something different from the usual review/preview/#HOTSPROTSTAKES that you're probably tired of reading by now. I'll probably change it up week to week, so until next time, War Eagle!