Auburn vs. Arkansas State: Breaking down the X's and O's

These two offenses may be almost identical, but Arkansas State's new head coach Bryan Harsin has added his own touch to the offense Gus Malzahn left behind.

Share All sharing options for: Auburn vs. Arkansas State: Breaking down the X's and O's

There is no use in me writing any more about the unique circumstances under which Auburn-Arkansas State will be played. We all know that Gus Malzahn, Rhett Lashlee and five other coaches/staff members were part of the 2012 Arkansas State football team that won 10 games and claimed the Sun Belt Championship. Defensive coordinator Ellis Johnson has said that the input from those guys has "been very helpful" despite Red Wolves head coach staying rather reserved about the direction of their offense.

Turnover at the top

For the third year in a row, Arkansas State is adapting to a new head coach. Granted, the Hugh Freeze-to-Gus Malzahn-to-Bryan Harsin progression hasn't changed the offense too much, but this year several key players are gone, as well. Quarterback Ryan Aplin led the Red Wolves in 2011 and 2012, but senior transfer Adam Kennedy (from Utah State) throws the passes this year. Many other positions also lost experience, per Bill Connelly of Football Study Hall.

Did you notice one position not mentioned? Running back. And did you notice what the Red Wolves did to the Golden Lions of Arkansas-Pine Bluff last week? They ran the ball 57 times for 509 yards.

Auburn spent much of the offseason preparing for the Air Raid of Washington State and it paid off with a 31-24 win with three interceptions. But will the Tigers be able to quickly change gears and stop the run?

Which is better, a tight end or an H-back?

During Tuesday night's press conference with the offensive and defensive coordinators, Ellis Johnson noted that Arkansas State on offense "is a good team, very, very similar to us," meaning the Red Wolves' offense is similar to Malzahn's and Lashlee's. He then said that they use a lot more tight end formations now that Harsin is the head coach. Malzahn uses more two-back formations.

There are advantages to using a tight end instead an H-back and vice versa. To learn more, read this post about some experimenting the New England Patriots are doing. In 2011 and 2012, the Pats went back in NFL time and used both Rob Gronkowski and Aaron Hernandez in two-tight end formations. But this offseason, Gronkowski has not been able to get healthy and Hernandez has been released from the team and indicted for murder, so coach Bill Belichick is changing the offense to use more 2-back formations. Belichick is specifically talking about 12 personnel (one back and two tight ends) vs. 21 personnel (two backs and one tight end), but the basics should still apply to 11 personnel vs. 20 personnel, which is what Auburn and Arkansas State typically use.

Advantages of a tight end over an H-back

1. Four receivers can quickly run routes down the field.

"When you have one back in the backfield and you have four on-the-line receivers, that gives you an ability to get into the defense potentially with four people."

Along with two wide receivers and one slot receiver, the tight end is a fourth receiving option that can run deep routes to stretch a defense vertically. Players out of the backfield can generally only run short routes. If they do run deep, like a wheel route, it is too late to complement the other receivers' routes. 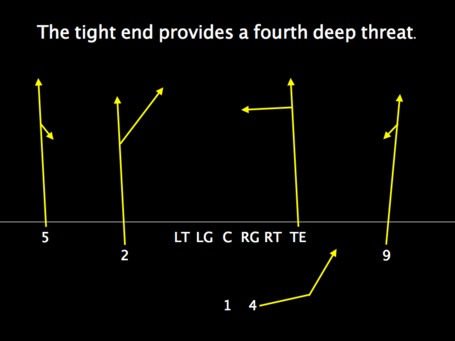 2. Even if only three receivers are sent down field, the defense has to guess which three.

At first glance, this only makes sense when talking about a formation with two tight ends. The defense has to keep in mind that one of them could stay back to block, but it doesn't know which one. If there is only one tight end and three wide receivers, there is no guessing which tight end might stay back because there is only one! Instead, defenders have to consider that the slot receiver may motion into the backfield to become an extra blocker or a runner on a speed sweep. Either way, having four men toward the line creates options for the offense. 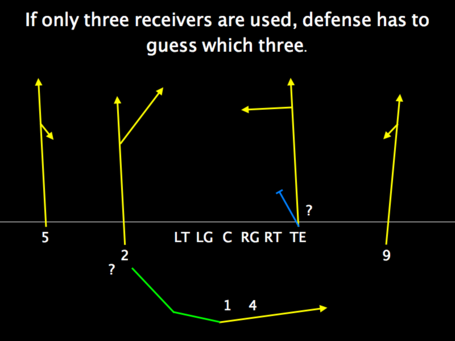 3. Extra width on the offensive line is available at the snap of the ball.

"You can put more width at the formation by having a guy on the line."

In the running game, the ball carrier aims for specific gaps between specific offensive linemen. By having a tight end in line with the offensive line, there is an extra gap for the running back to hit and for the defense to fill. An H-back can also create an extra gap, but he has to wait until after the ball is snapped to create it. The tight end creates the gap by just standing in the formation. 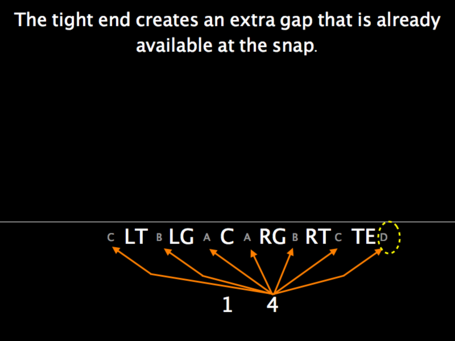 Advantages of an H-back over a tight end

1. Extra width on the offensive line is not announced by formation.

"By having them in the backfield, you can create that same [width] after the snap so the defense doesn't know where the [width] is." 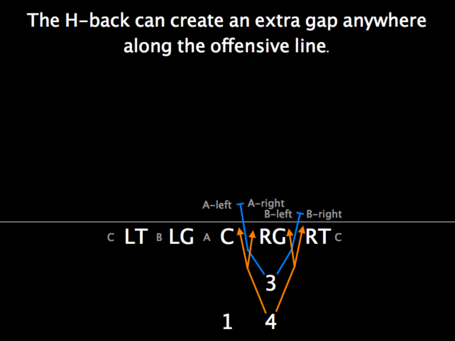 2. The H-back can block different defenders from different angles.

"He could be offset one way or the other and create different blocking schemes and angles that it's harder to get from the line of scrimmage." 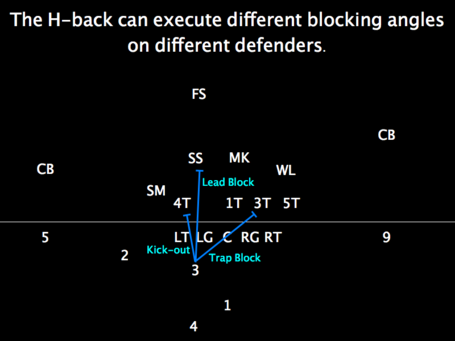 3. In pass protection, an H-back can help from either direction.

"It's a little easier to pick [blitzers] up when you a have a guy in the backfield that can step up and block him from the [H-back] position as opposed to a tight end in the line of scrimmage who probably isn't going to be able to loop back in and get him."

A tight end may stay back in pass protection, but he can only block blitzers if they come from his side. An H-back can read a blitz for a moment and then provide help to whichever side of the line needs it. 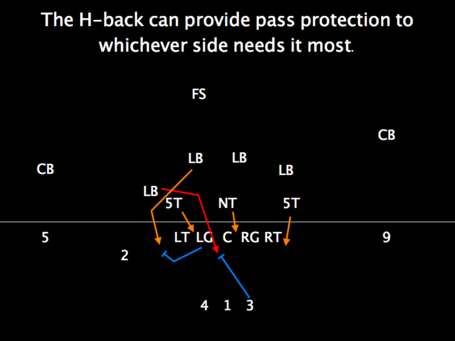 The same but different

Mostly, the Red Wolves' offense should look really similar to the Tigers' offense, but there will be subtle differences on Saturday. Sure, from time to time, Auburn will use a true tight end and Arkansas State will use two- (and three-) back formations, but the coaching staffs should be trying to maximize the talent on the rosters instead of forcing a particular brand of football on a group of players.

These are some things I'll be keeping an eye on during the game: Will Arkansas State throw more downfield passes since their tight end provides an immediate vertical threat? Will Auburn's H-back be in position to pick up that last blitzing defender before giving up a sack? And how many different defensive positions will the H-back be asked to block?