In this edition Oscar heads west to take in old battlegrounds and expresses his desire to see new places.

Share All sharing options for: Wednesdays with (Oscar) Whiskey: GTT

Hello, hello, hello Auburn Tiger fans, how are you all on this fine Wednesday morning? That's good. How am I? I'm doing fairly well myself, thanks for asking. Since you know it is Wednesday and here you are reading this that can really only mean one thing - another Wednesday with me, Oscar Whiskey! It was another great weekend for our Tigers walking out of Jordan-Hare Stadium with another win this time against the San Jose Spartans (note: I had the most accurate prediction last week). Two games in with two solid wins and no looking of slowing down any time soon. Well, except for a bye week this upcoming Saturday but I don't think that will slow down our spectacled and visored coach all that much. So, yeah, wait eight months for football and then take a break. Sure, that's okay and not a big deal. That's nothing like going sober for a good period of time then binging like a maniac and immediately going back to being stone cold sober. It's all good and I'm perfectly fine and why is it so hot in this room and why are the lights so bright?

So I have a confession to make; I didn't watch the game on Saturday. I mean, I have seen the highlights and I read a few recaps but the game itself? Didn't see it. Instead this past weekend I decided to head out west to Austin to check out Darrell K. Royal - Texas Memorial Stadium to see the Longhorns take on BYU. I had no vested interest in this game other than I wanted to see a game in DKR. I didn't wear any Auburn apparel (with the exception of my Auburn wristbands) because I didn't want any of my orange shirts to be confused with UT and I didn't want any of my navy blue shirts to be confused with BYU. So I wore a brown shirt, which was very apropos as Texas' performance was shhhhhpoop. If you ever had a moment over the past year and thought, "Wow, Auburn's defense is terrible," then go watch the highlights of this game and feel fortunate.

The stadium, however, was incredible. It easily rivals any stadium in the country (the picture above doesn't do it justice as behind me was the curved part of the "horseshoe.")  At Jordan-Hare, the path to getting to your seat is pretty straight forward and simple (this feeling is probably due to familiarity) but at DKR, you walk in and the first thing that hits you I--air conditioning? Yep, the concourse area is enclosed, has AC and if you were one of those that attended the game against Arkansas like me, that would have been a more than welcome respite from the heat. Getting to your seat is a little tricky as the concourse area almost feels a bit labyrinthine but there are plenty of signs so it is not too overwhelming. 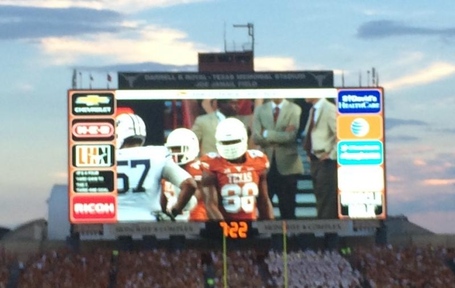 Then there's that Godzillatron. Mmm, girl, dat Godzillatron. That thing is damn impressive and at times hard not to watch that instead of the game that is happening right in front of you. I also liked how the student section placement in the stadium in that is almost entirely behind the visitors bench than in the corner like at Jordan-Hare. Also, the west side grandstand all have backs to the seats permanently and not like those cushions you can rent before the game (but those are available at DKR).

I'm sure you are all thinking right now what does any of this have to do with Auburn football?  Well, because 30 years ago, the #11 Auburn Tigers traveled to Austin to take on the #4 Texas Longhorns in that stadium.  I went there because 30 years ago my grandparents drove out to Austin to see that game.  They went to go see Bo Jackson and the Tigers play only to drive back to Houston with a second loss and seeing one of the greatest athletes of all time get hurt.  I went there in the hope that maybe I could take in some of the same sights and sounds as they did.  I went there because I know the only way I will ever see Auburn take that field again is if I imagined them being there.

Thirty years ago, Auburn's football program grew to nationwide prominence and they traveled the country to prove it.  Today, Auburn's football program has once again grown into nationwide prominence and it is content in staying in the southeast.  Oh sure, the Tigers are traveling to Manhattan, KS next week but this is the first regular season non-conference game that they have done so in TWELVE years.  That is pathetic. That is embarrassing.  Jay Jacobs should be ashamed.

I want Auburn to travel.  I want this program to go to places it has never been to before and play against teams they haven't played before outside of bowl season.  I want to go with them and experience these things as well.  I don't just want them to this once every couple of years.  I WANT THEM TO DO THIS EVERY SINGLE DAMN YEAR!  How anyone can be content in playing Louisiana Tech AGAIN (no offense Bulldogs) in Jordan-Hare AGAIN is beyond me.  I love that stadium as much as anybody who comes to this website but hell, some of you who actually live in Alabama still don't go to the games.  I travel across three freaking states to see our Tigers play and yes, I know my mentioning this is getting old.  I do it because I love Auburn football and want to see them play EVERYWHERE.

You should all want this too and you should all want this badly.  But you all would rather worry about supposed media bias or Bama favoritism or whatever instead of going out into the world and hearing what people actually think of Auburn face to face.  It's cool, c'est-la-vie or some crap like that.  However, for me, I'd gladly give up not seeing Auburn play Samford to go somewhere I've never been and you are all free to join me.