Share All sharing options for: A Tremendous Opportunity Awaits Auburn. 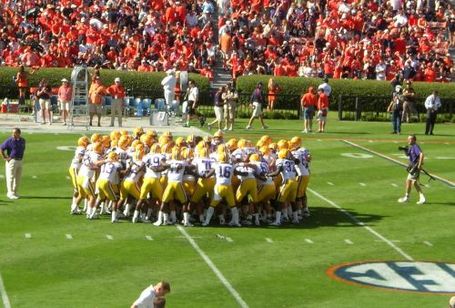 Can LSU circle the wagons once again?

War Eagle, everybody! It's time to buckle up the chinstraps and bring the extra aspirin, because it's LSU week. The Auburn Tigers head to Baton Rouge this weekend, for a 2:30 PM nationally-televised CBS matchup with top-ranked LSU. With 36 players gone from last season's BCS national championship team, and another half dozen major players nicked up and unlikely to play, most folks expect Auburn to struggle.

News out of Louisiana yesterday indicated that 3 starting LSU players would be suspended for at least this game. Those players are starting corner Tyrann Mathieu, cornerback Tharald Simon, and starting tailback Spencer Ware. The lost of Mathieu would probably be the biggest blow for the Bayou Bengals, because Mathieu has been a big play machine on defense this season. It's important to note that as I write this in the wee hours of Thursday morning, there's been no official confirmation of the suspensions from the LSU camp. From his radio show last night, head coach Les Miles would only comment, "These issues are internal issues and I am not ruling out anything. That is all I will say."

Mathieu or not, the Auburn offense faces a tough task. LSU is only giving up 75.1 rushing yards per game, and they've forced 16 turnovers in 7 games. LSU has held opponents to an astounding 4.0 yards per play. Auburn has been run-heavy this season, and will be giving quarterback Clint Moseley the first start of his career in LSU. The Auburn defense must stop an LSU offense determined to control the line of scrimmage and wear down the opponent. LSU averages just 369.1 yards per game, but has only turned the ball over 3 times all year. Starting LSU quarterback Jarrett Lee, famous for pick-sixes in the past, has only thrown 1 interception in 7 games.

One can just about throw Auburn's offensive and defensive statistics out as irrelevant in this game. The defensive numbers are heavily skewed by extreme bloodletting exercises against Utah State, Mississippi State and Clemson. Auburn has played a whole lot better the last four games. Offensively, the Tiger numbers look better than what's currently going on. Auburn has become very one-dimensional on offense, and must diversify this week to have any chance in Baton Rouge.

With few meaningful comparisons available on offense or defense, I decided to look and see if Auburn has any advantage on special teams. The answer: maybe. On kickoffs, Auburn's Cody Parkey is averaging 68.9 yards and has 21 touchbacks in 37 attempts. LSU has used 3 different guys this season, for a 62.8 yard average, and only 7 touchbacks in 51 kickoffs. Auburn's Tre Mason is said to be healthy for this one, and Mason's sporting a 28.4 yard average. LSU gives up only 19.9 yards per return, so something will have to give there. Auburn touchbacks will be important, because LSU's Mo Claiborne is averaging 29.5 yards a pop. Auburn punter Steven Clark has been a weapon, averaging 41.2 yards per kick, and regularly getting a hang time of 5 seconds or more. Clark has killed 22 punts inside the 20 yard line this season. LSU's Brad Wing is also impressive, getting good height and averaging 43.4 yards per punt. Fielding will be critical. Neither team allows much in the punt return game, so successful fair catches will be at a premium. LSU has allowed 5 total punt return yards all year, and Auburn has allowed only 27. If the game comes down to a field goal duel, Auburn's Cody Parkey is 8 of 11, and LSU's Drew Alleman is 9 of 11.

Comparing the two teams' schedules, LSU has a pair of impressive out of conference victories over Oregon and West Virginia. Oregon has a good shot at winning the PAC-12, and West Virginia is a Big East title contender. There's also a drubbing of Northwestern State. Auburn hasn't drubbed anyone. The Tigers struggled with Utah State and Florida Atlantic, and were run over in Clemson. In conference, things are a bit more interesting. Auburn was embarrassed in Arkansas, but has close wins over Mississippi State, South Carolina and Florida. LSU is undefeated, with wins over Mississippi State, Kentucky, Florida, and Tennessee. LSU's opponents have collectively won only one SEC game, and that was Florida over Kentucky. MSU, Ky and UT have yet to win a conference game.

There's little argument that Auburn catches LSU at a good time. A young Auburn squad is improving, especially on defense. LSU has the pressure of being top-ranked, on national television and at home. Add in possible suspensions, and LSU might be vulnerable. On the other hand, Auburn hasn't won in Baton Rouge since 1999.

We'll have our usual open thread up Saturday morning, and we'll be back with the usual play by play. As always, feel free to stop by and join the fun! Auburn's brutal October schedule swings by the bayou Saturday, and we'll hope for a 3rd October win in Death Valley! War Eagle, and beat LSU!