The Foes From Old Florida: Gators Back in Rotation

Share All sharing options for: The Foes From Old Florida: Gators Back in Rotation 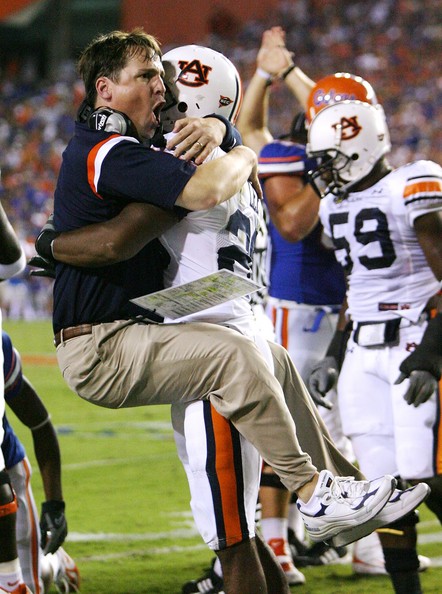 I think ole Will plays for the other team now.

One should not get a little mushy-eyed over one's opponents, but other than the firing of Mike Shula, few things  probably were as heart-breaking for Auburn fans the last decade or so as the loss of the Florida Gators matchup after the 2002 season as an annual event and sure-fire road trip for many a blue and orange clad fan. Having recently read SB sister blog Alligator Army'sode to their old foe Auburn, it almost brings a tear to my eye when you think about this perfectly good rivalry that was left to rot on the vine by the SEC powers--a match made long ago, which remained close and respectful through the years and provided many great memories for each side. It's hard to believe that it will be nine years since the rivalry ended on an annual basis, with only the home and home series in 2006-07 as sustenance. That was four long years ago. All I can say to the Boys from Old Florida is welcome back! You've truly been away too long.

As was pointed out in the article above, Auburn is indeed Florida's oldest conference rivalry. Yea, the Georgia series has now passed Auburn in the total number of games played and there's no doubt that the World's Largest Outdoor Cocktail Party is certainly the more bitter rivalry for them within the conference, but I derived from that post the notion that Florida fans feel an equal loss with Auburn no longer a standing date on the schedule. They know we should have been in the eastern division, too, but the balance would have been off-kilter. And while they may blame us somewhat for 'choosing' to drop them when the SEC went from two permanent cross-divisional games to one, asking us to choose between them and Georgia is like asking a polygamist to choose between his wives. We Auburners already had to give up sister-wife Tennessee a decade earlier, then when the summer blond Florida is looking like the fun choice, especially with her fertile-Myrtle recruiting grounds, providence demands we stick with the old battle axe Georgia. Look on the bright side, Gators. At least you got hitched to a pretty good bride's maid in LSU.

With the schools being only 277 miles apart, finally do I have an answer to why I've always thought that the Gators were the best travelling team in the SEC. Having attended virtually every Florida game in Auburn since 1985, I've never ceased to be amazed at how many fans the Gators bring. They infiltrate into the Auburn sections, easily seen with their faded blue (especially since we went to all-orange) jerseys and jorts. EDITOR'S NOTE: out of respect for the renewal of this series, we will limit jorts comments to only those that can be made in direct reference to attached pictures of female Gator fans of particular fancy. Really, I mean it.

These modern day Gators seem to have a short memory though. They only seem to recall that they're 1 for 3 in the last four regular season matches. Their mighty Tebow even got shut down against us--twice, which probably serves to mystify our 2006 and 2007 wins even more in their eyes. My memory goes back much further, to the debut of Steve Spurrier in 1990, when Auburn went a dismal 2-8 during the 1990s. And coupled with two losses in the 2000 season, we lost seven in a row, the longest slide to an opponent during my 27 seasons as an Auburn fan. While the 1993 Florida game was the absolute greatest Auburn game I had ever attended, and the 1994 Florida game was the absolute greatest Auburn game I had ever seen (until last year's Iron Bowl) they still didn't make up for the sting that losing to Spurrier brought for all those years. And it still burns me every time I find an old textbook from college and color in it.

Lost to the ages are many memories shared between the schools and their fans. As a young impressionable freshman in 1985, I was particularly smitten with the pelting of oranges at the Gator players as they ran onto the field right before the whistle. This seemed the perfect retribution for the painting of the Welcome to Alabama sign with Go Gators the night before the game, as I witnessed while driving from Columbus back to Auburn that morning. I was more than aptly prepared with oranges two years later, but appeared to be the only one throwing them. It was payback for the year before, getting pelted with cups sitting in the visitor section at Florida Field at the end of the game after Kerwin Bell brought the Gators back from a 17-0 4th quarter deficit and won 18-17. I really miss the oranges though. These days, something like that may result in a charge of domestic terrorism. Better to not have that on your permanent record, O' students of Auburn.

But with so many fond and not so fond memories in this series, I could write all day, but here's a few snippets of some of the ones that made the biggest impressions. I'd love to hear yours!

So gear up, Auburn fans. Many of you have never tasted Gator (it's best breaded and deep-fried, with fresh lemon) but you're about to get a heaping helping this fall. They will invade us en mass and will bring all they've got. They've something to prove with new coach Will Muschamp. I'm sure we will have quite the greeting for him, he who turned down our job offer immediately following the Tuberville days. I hear he likes oranges.