Jay Jacobs may have his man to lead the Auburn baseball program.

The Auburn baseball coaching search has been quiet recently, but Jay Jacobs could be closing in on a big name hire. Oklahoma head coach Sunny Golloway has been mentioned as a possibility in the last couple of weeks, and on Friday, Jacobs followed Golloway and OU athletic director Joe Castiglione on Twitter. 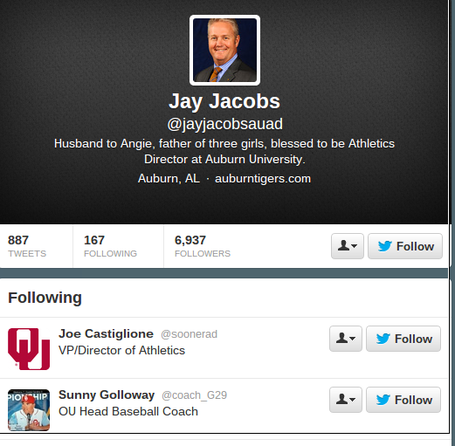 Obviously, you can take that with a grain of salt, but it is a bit peculiar. And with Oklahoma's season done the timing is perfect to hire Golloway. Surely this isn't purely coincidental that, after more than two weeks searching for a new coach, Jacobs decided to randomly follow Golloway.

If this actually happens, it would be quite a splash -- the second recent splash hire for Auburn athletics. Golloway has been at Oklahoma for nine seasons, reaching eight regionals, four super regionals, and one College World Series. At OU, he's compiled a 346-181-1 overall record and a 116-97-1 mark in Big 12 play. The Sooners have won at least 40 games in each of the last five seasons.

Carey Murdock and Eddie Radosevich at SoonerScoop.com have confirmed that Golloway is in Auburn and is interviewing for the position. They also add this nugget, that Golloway was the one who made the first move:

The plane was a private charter owned by Auburn University according to sources. Flight tracking websites such as FlightAware.com do not show any planes leaving Norman during that time and they show no planes arriving in Auburn, from Norman, Friday.

Rumors circulated earlier this week Golloway could be a target for Jay Jacobs, Auburn University athletic director. But a source close to the Auburn administration tells SoonerScoop.com, Golloway is the one who initiated the contact with the Tigers, not the other way around.

Golloway serves as the Sooners' hitting coach, and in 2012, they were third in the Big 12 with a .281 average. OU's 32 home runs were tied for the conference lead, and its 314 RBIs were second. During his 16 seasons as a head coach, Golloway has seen 74 of his players taken in the MLB Draft, including 11 in 2011. For comparison, Auburn had three players selected off the roster in 2013.

Why would Golloway want to come to the Plains? According to SoonerScoop it's pretty simple: Money and facilities.

I think OU might have to bump Golloway up to the $500K range. If Auburn goes something crazy like $750K, it could be goodnight.

I think there is a chance OU could lose Golloway. Being told Auburn might be willing to throw out a really big number.

So, there's really no way to overstate this. Hiring Golloway would be absolutely huge. In fact, Auburn would be hard pressed to find a better coach.