The winning touchdown was a play for the ages, but this Auburn victory was not a fluke. The Tigers were able to use pace and packaged plays to move the ball against the Alabama defense.

Share All sharing options for: Auburn 34, Alabama 28: Breaking down the Tigers' packaged plays

Before the start of the third quarter, Tracy Wolfson asked Nick Saban about the Auburn's long touchdown drive just before halftime. He said, "Well, we just didn't play very well on defense. They ran the counter on us three times in a row. We never closed and spilled it."

Though the big play at the end of the drive was an interesting form of the zone read with a sort of jet-sweep blocker, Auburn made it down the field by using the counter on three consecutive plays. The counter is one of the plays Malzahn specifically complimented in the Arkansas State game. It basically involves the backside guard pulling and kicking out the end man on the line of scrimmage, and the H-back lead blocking to create a lane for the running back.

In this drive (video here) and in two more touchdown drives, Auburn found a play that could be executed consistently, successfully and quickly. Gus Malzahn and Rhett Lashlee then used that play over and over while Nick Saban and Kirby Smart had no answer. 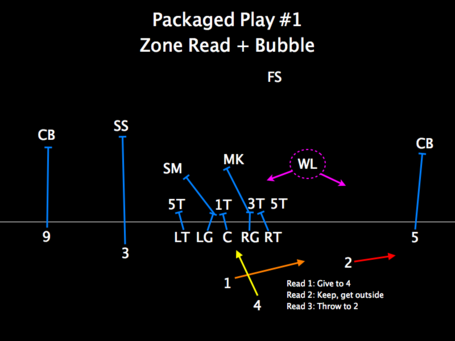 At the start of the third quarter, Auburn had a chance to tie the game and prove to itself that any defensive adjustments Alabama made during halftime could not stop it, so the Tigers turned to one of their more versatile plays.

Nick Marshall rushes up the middle for 7 yards

Nick Marshall rushes up the middle for 7 yards

The first play was the inverted veer, but with two stacked backs instead of four wide receivers, and with a receiver sweeping through the backfield instead of being stationary beside the quarterback like that diagram shows. The second play was a zone read but C.J. Uzomah motioned through the formation and positioned himself as a wing. He simply blocked the man in front of him and Marshall was able to gain 7 yards on the zone-read keep. But notice that it was a safety who came down to cover the wing. I don't believe this actually happened in this game, but this formation could be used to take a shot downfield if the defense is going to sacrifice a deep safety like that.

This is when Auburn started using the packaged play. 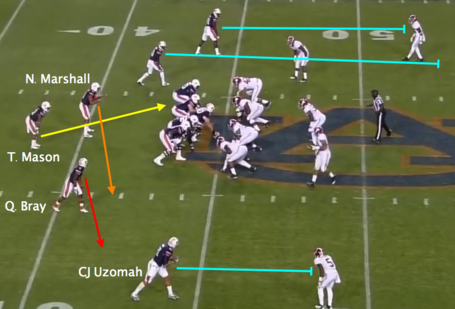 From a true spread formation, Auburn ran the zone read. Marshall elected to give, Mason bounced it outside, and Jarrick Williams was unable to hold the edge because he stuck with Marcus Davis too long. On the other side of the formation, notice the route Quan Bray ran. 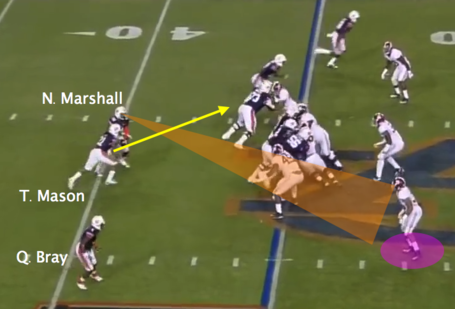 Out of the same formation, Auburn ran the zone read again, but Marshall kept the ball since his read stayed in the box. As he ran to his right, two defenders quickly closed in, but Bray was open as he ran the bubble route. Marshall tossed the ball his way, Bray made Williams miss and he gained 9 yards. 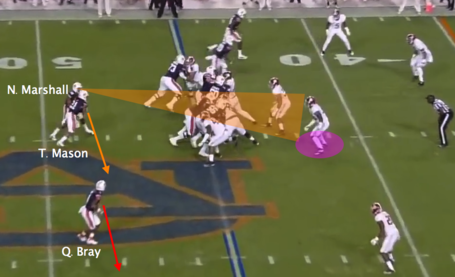 Auburn quickly lined up in the same formation and ran the same play. Only a yard was needed, and the read was fading back to cover Bray, so Mason took the ball this time and easily got the first down. 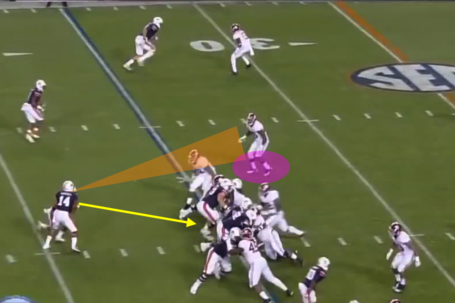 The Tigers used the same play again. Marshall kept the ball, ran just enough to lure in two defenders, and then fired the ball out to Bray. Despite catching the ball at least three yards behind the line of scrimmage, Bray was able to gain nine yards again. 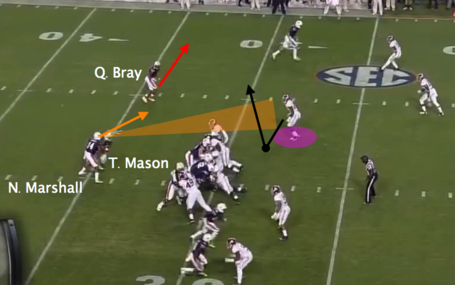 Once again, with only a yard needed to move the chains, Marshall gave the ball to Mason on the zone read, who gained 6 yards. 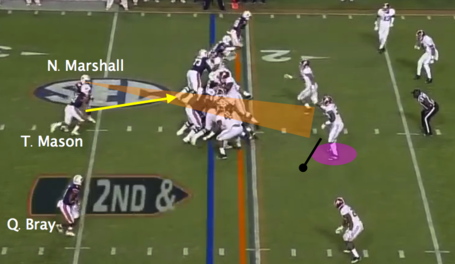 After this play, defensive lineman Brandon Ivory went down with an injury, but Gus Malzahn was not buying it. His team had just run the same play five times for 40 yards in 73 seconds of game time (97 seconds of real time). Regardless, Alabama got an injury timeout and then play continued.

Despite the time stoppage, Malzahn decided to keep using the same packaged play. Marshall kept the ball this time and looked to throw the ball out to Bray, but Williams was playing the bubble route well. Marshall wisely pulled the ball down and simply got as many yards as he could. 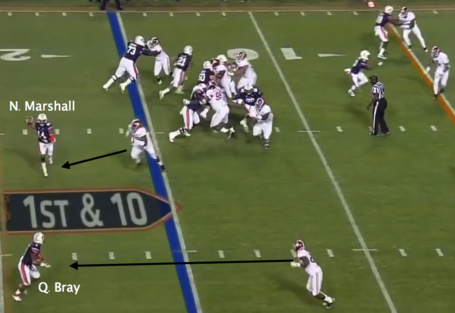 Nick Marshall passes right to C.J. Uzomah for 13 yards and a touchdown

This was the same play as the game winning pass in the Mississippi State game. Mason was behind Marshall instead of beside him, and Prosch was outside of the tackle box instead behind the guard, but everything else was exactly the same.

The Bulldogs played Cover 1, so when Uzomah beat the corner, he was wide open. The deep safety couldn't provide any help. The Tide were playing Cover 2 with a robber playing zone in the middle. Prosch and Uzomah ran routes and their defenders kept close coverage knowing that they had help over top. But Uzomah made a double move, the corner reacted just a bit and Marshall fired a strike. It was thrown high enough so that only the 6'4 tight end could reach it, and it was thrown so fast that the safety could only watch. 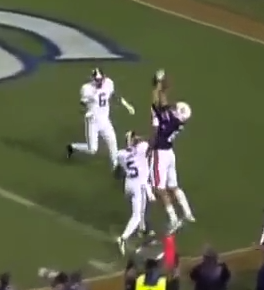 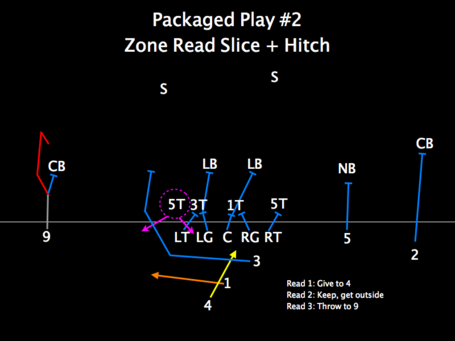 After Alabama went up by seven on an inexcusable 99-yard touchdown pass, both teams took their turns going for it on fourth down and failing. Auburn was then forced to punt, and Alabama moved into position to go ahead by 10 with a 44-yard field goal. Fortunately, the Tide's great special teams continued to falter as the Tigers blocked the attempt and started the potential game-tying drive at the Auburn 35.

Tre Mason rushes up the middle for 7 yards

By this time in the game, Auburn was just trying to run what it knew would work. There wasn't time for extra misdirection, reverses, play action passes or anything else that could result in a negative play. The first play of the drive was a simple inside zone run, and it gained 7 yards just like that. That was followed up with the same play, but Mason could only manage 1 yard.

To get the first down, Auburn sent Shon Coleman into the game as a sixth offensive lineman. When Corey Grant motioned out of the backfield, Alabama took a man out of the box. Auburn had six blockers and Alabama had seven defenders up front, but one of them stayed behind to watch Marshall. Auburn was able to push the line back and Mason got enough for a first down. 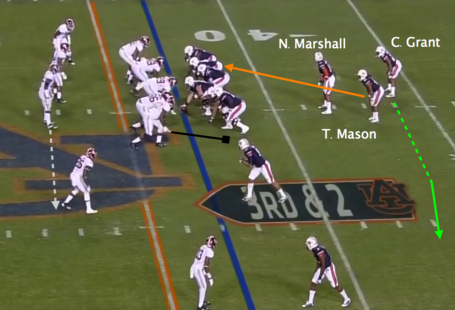 Tre Mason rushes up the middle for 3 yards 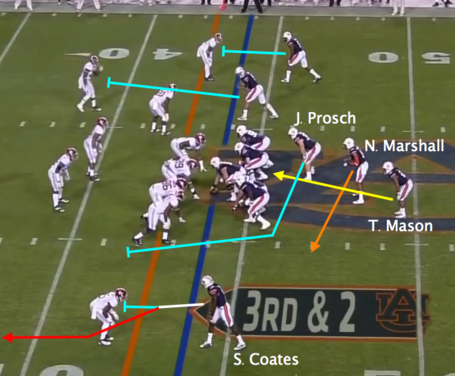 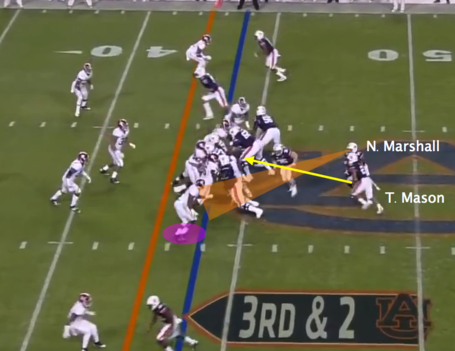 Ultimately, it didn't matter who Prosch was blocking because Marshall kept giving the ball to Mason, and with the pace they were running, Mason and the offensive line were able to move the chains and frustrate the Tide defense.

The defense began to focus on stopping Mason up the middle, but it knew Marshall would eventually keep it if that happened. On this play, Marshall did just that. He kept the ball and ran left. Every other time this happened, Coates was blocking the corner down the field. This time, Auburn had something else in mind. 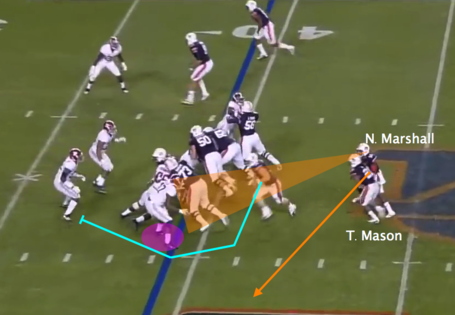 Alabama corner Cyrus Jones saw Marshall escape to the outside, so he got past Coates' block and was coming down to make the tackle. He should have stayed with Coates because safety Ha Ha Clinton-Dix was coming down to make the tackle, as well. Prosch should have been there to stop the safety, but he focused on keeping the linebacker away from the play. The player on the ground is the defensive end that Marshall read. Marshall quickly tossed the ball to Coates, the score was tied, and the rest of the game will be remembered forever for the winning field goal return. 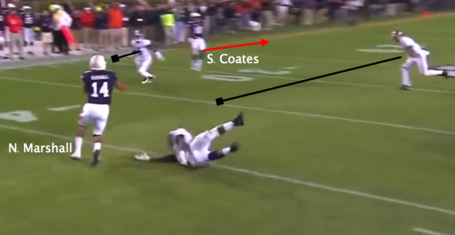 This play is similar to the zone-read bubble packaged play, but the pass is down field, so, to avoid an "ineligible receiver downfield" penalty, the offensive line had to stay within 2 or 3 yards of the line of scrimmage. Alex Kozan gets the closest, but he turns around right at two yards.

Auburn has shown the basic form of that play for much of the season, but that was the first time that the downfield pass component was used. Coates himself said, "We ran that play the whole game, we were just waiting on them to bite. They did it at the wrong time." Meanwhile, Saban said, "We actually had bracket coverage on (Coates), but the corner did not stay with (him). You have to have tremendous discipline to play against this offense."

This Auburn offense has gotten better and better as the season has continued. The players have the experience and confidence to run the most basic plays, like the counter, over and over with success. They can run a multi-faceted play like the zone-read bubble with enough pace that they cover the field in seconds. And they can lull a defense into overplaying a single threat so that a big play opens up, like how the zone-read slice opened up the downfield touchdown pass.